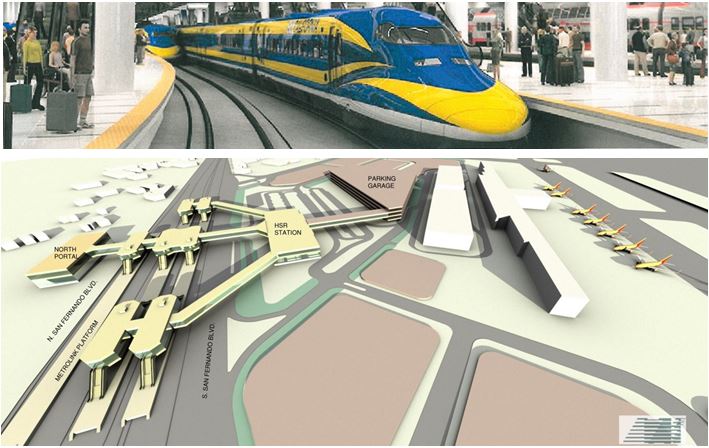 After AVA completed the designs for five station sites, the Burbank to Los Angeles segment was redefined for Public Scoping in 2014 and subsequently, the project section was split into two, Palmdale to Burbank and Burbank to Los Angeles. Following this, the proposed station locations were refined and included two stations, one at Palmdale and one at Burbank. The site area for the Burbank Station is approximately 90 acres, with generous portions allocated for station parking allowing up to 7,100 stalls and for potential development opportunities. The areas targeted for transit-oriented development are along the existing Hollywood Way and Winona Ave corridors, providing desirable street frontage as well as easy access to the station and adjacent parking areas. Opportunities also exist for more direct connections between the station and parking components and the Transit-Oriented Development (TOD). Three site plan options were studied based upon different rail alignments above and below grade. Similarly, several site plans were studied for Palmdale to accommodate up to 11,300 parking stalls on approximately 180 acres.  For reason to promote TOD on both sides of the alignment, a connection to both sides of the track was incorporated into the planning via a pedestrian/passenger bridge.

The stations have been designed to facilitate smooth, uninterrupted movement, with as few conflicts as possible. The station layout is typically based upon the right-hand movement of patrons into and out of the station, with unidirectional escalators (vertical circulation points) recommended in the direction of travel to keep the departure and arrival passenger sequences separate and conflict-free. Pedestrian paseos with easy connections between the High-Speed Rail Station, a future airport terminal, and the Metrolink Station were studied in the site plan for easy pedestrian and bicycle circulation.